Daibazaal
This article is about the Drule king as he appears in DotU-related interpretations. For a list of other meanings, see Zarkon (disambiguation).

Zarkon is the sadistic and tyrannical king of Planet Doom and the Drule Empire.

King Zarkon (Emperor Daibazaal) of the Planet Doom is one of the rulers of the Drule Empire, though by no means the absolute ruler. He is constantly using others as scapegoats for his own failures (à la Zanbazir using Prince Heinel as a scapegoat), including his son Prince Lotor. In the Japanese version, however, he is the evil ruler of his own Empire, without anybody controlling him. This differs from the American version, where he is a king with a Senate advisory body, with none daring to oppose him; very similar to Voltes V 's Emperor Zanbazir in his treatment of slaves (ex. whipping, starving, killing them on the spot, which is typical in super-robot shows).

Later Zarkon managed to redeem himself prior to his final defeat, and became a member of the Galactic Council. His redemption, however, was a ruse by which he and his son worked together to take over the alliance.

Most of Zarkon's life before the series is not revealed, though its mentioned at some point he extended his lifespan with the flowers from Planet Lyra. [1] It is known he was crowned King of Doom and his son Lotor was born to him (though the order of those events was not revealed.) It is known that during the war between the Galaxy Alliance and the Drule Empire, Zarkon waged his own conquest campaign. The Drule Empire Council declared him an outlaw due to this independent campaign [2], but he had his sympathizers even within the council.

He then set his sights on Planet Arus. He first launched an attack to lure Voltron out, and his witch Haggar cast a spell that split the robot to five parts. Soon after, he invaded, killing Alfor in a duel. A few years later, he launched a massive bombing raid on Arus, and took many of the survivors as slaves. It was during this attack that Keith and company were captured. [3]

Voltron would soon come back[4], and it and the Voltron Force would be a thorn on his side. While he scored temporary victories, he would be frustrated in his efforts to destroy the robot and conquer Arus.

Eventually, agents of the Drule Empire would depose him and make Lotor king of Doom. Zarkon was forced to pilot a Robeast and engage in battle with Voltron. [5]While the robeast was destroyed, Zarkon escaped in an escape pod. By the next day, his war machine was destroyed, and it looked as if he would have to sit on the sidelines in the larger war between the Galaxy Alliance and the Drule Empire. [6]

But the conclusion of that war would give him an opportunity. Planet Drule exploded, and the Drule Empire died with it. [7] Furthermore, the Galaxy Alliance was weakened in its war of attrition with the drules. Zarkon launched a second campaign of conquest. One of his early targets in his second campaign was Planet Pollux, and Cossack the Terrible, a general in the Doom military, led the attack. [8]

Zarkon launched several offensives and made new alliances. Most notably, in an alliance with King Largo of the Rogue Galaxy, he launched an attack on Earth, even capturing Galaxy Garrison briefly. [9] He also made an alliance with Queen Merla, who was trying to fill in the power vacuum in the wake of the Drule Empire's death throes. [10] Merla would later break that alliance. [11]

One day, Lotor made a failed attempt on his life, and he imprisoned his son. Lotor had escaped, and a short civil war started between father and son. [12] Meanwhile, Zarkon was losing his second conquest campaign, as the Alliance went on the offense. [13] Zarkon and Lotor eventually reconciled and executed a plan to trap Voltron and the Voltron Force on an exploding planet. [14]

He made another power bid with Throk, a former Drule Empire viceroy. Their plan was thwarted by both Lion Voltron and Vehicle Voltron.

King Zarkon is an immense, and intimidating figure, towering over all main characters in the series. Zarkon's eyes are yellow, and reptilian with black markings above them, his ears are fin-like in appearance, while Zarkon's face has scale-like ridges starting from the bridge of his nose and ending ontop of his head.

King Zarkon is an immensely powerful fighter, easily beating his son in battle [15], and having killed Alfor in a duel to the death. [16] Zarkon is a skilled mecha pilot, and his piloted robeast was one of Voltron's most powerful foes. [17]

Zarkon's relationship with his son is complicated. Oftentimes Lotor makes attempts to overthrow, or to kill his father, Zarkon is aware of these attempts, and is on-guard for them. Zarkon himself has attempted to return the favor and have Lotor killed at some points, though usually he is talked out of it by Haggar.

At some points, Zarkon seems to express pride, or even affection towards his son; hugging Lotor after he returns from a long spree of conquering[18], expressing pride in Lotor's cunning at several points, and at one point having a gold statue built for his son's birthday. 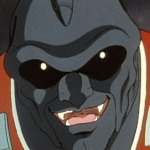