Voltron Wiki
Register
Don't have an account?
Sign In
Advertisement
in: Lions (DotU), Voltron: Defender of the Universe 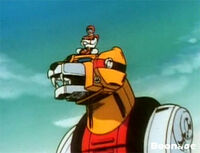 The Yellow Lion is piloted by Hunk and is the left leg of Voltron.

The Yellow Lion is the left leg of Voltron and the third massive lion present. It is mostly covered in yellow save for its limbs and mouth. It is the only Voltron lion to have blue eyes and large ears with black and red tape running through it. It wears what appears to be a black waist-length piece of clothing with a shorter red singlet worn over it, with horizontal slash holes. It has wheel-like bolts in its shoulder and limb joints in order to allow fluid execution of movement. It sports a cannon and two miniature red protrusions on its back. It also three claws and has a white-colored tail.

The Yellow Lion resides within a lion-shaped cave far from The Castle of Lions and is therefore Arus' secondary line of defense. It comes to life once its activation key is placed.

The Yellow Lion forms the left leg of Voltron. During formation, it loses its limbs and tail. The Yellow Lion affixes to the Black Lion's left leg, the Blue Lion affixes to its right leg, and the Red and Green Lions affix to its right and left shoulder. The Black Lion's mouth opens up to reveal a humanoid face and its ears open up to form horns and the formation of Voltron is completed.

The Yellow Lion has a number of abilities displayed in the show.