Ian Brill
Andworld Design
Issue #4 is the fourth published chapter in Volume 1 of the Comics, and focuses on Pidge. The storyline of Volume 1 occurs after the episode Rebirth and ends prior to the episode Crystal Venom.

Team Voltron's quest to save Coran's life gets extra-complicated when they have to face off against brain-sucking mushrooms, an ancient chess master, and a Sphinx's riddles. Can Pidge lead Voltron through these tests of brains and brawn in one piece?

After being instructed to find the Sphinx by Princess Malocoti, the Paladins search through a desert looking for a ziggurat where the great Sphinx resides. Hunk is tired of their constant struggles; Keith reminds him that their situation pales in comparison to Allura's, who sacrificed her life force to heal the Balmera. Lance is confused about what they are even searching for, but the Paladins finally locate the ziggurat. Upon existing their Lions and approaching it, however, the ziggurat morphs into the Sphinx himself. The Sphinx demands answers as to why he has been disturbed. Pidge explains that they seek a Yalexian pearl. As Princess Malocoti stated, the Sphinx refuses to divulge the location of the pearl until the brightest of them passes the three tests: the Test of the Body, the Test of the Mind, and the Test of the Soul. The Paladins declare Pidge as the one chosen to attempt the tests.

The Sphinx returns to his ziggurat form to allow the Paladins to enter. Pidge wonders why there is a "Test of the Body" if the smartest person is supposed to attempt the tests. The Test of the Body begins in the first room, and it entails Pidge defeating her fellow Paladins in combat as they are overtaken by mind-controlling mushrooms. Out-numbered and out-gunned, she thankfully knows the weaknesses of the other Paladins to exploit them. She reflects on how she was often mocked in the past for being paranoid, and praised for being prepared, because of her habit of obsessively compiling data. This habit includes keeping a dossier on her fellow Paladins to examine their weaknesses and strengths.

Pidge deduces that Lance's range makes him a top priority target, and that he is vulnerable up close. She quickly defeats him with a single punch. Hunk is strong and dangerous from a long range, but Pidge knows his weight can easily throw him off-balance, so she swipes his footing out from under him, the fall rendering him unconscious. She knows that Keith is a skilled fighter, but his brashness makes him unaware of his surroundings. She draws all his focus on her while using her Bayard's grappling hook to hit him with debris, knocking him unconscious.

The final enemy is Shiro, who Pidge admits has no apparent weakness other than his painful memories that he has largely forgotten. As she dodges his attacks, she cannot think of how to exploit his debilitating flashbacks, but decides she may be able to hack his prosthetic arm remotely from her suit's computer system. The hack works, freezing Shiro's arm in place just long enough for her to knock him down. As he lays defeated, she apologizes for hacking his arm and promises to reboot it. The Sphinx compliments her impressive work and grants her access to the next test. After the Paladins are freed from the mushrooms, they wonder how Pidge defeated all of them, and she admits that she has files of their weaknesses. Hunk and Lance are disturbed by this, but Keith thinks it is smart. Shiro is worried about the information ever falling into enemy hands. Pidge apologizes and knows how strange it seems, but maintains that it is simply her nature.

The Test of the Mind commences with a game of chess. When questioned about how he knows of a game from Earth, the Sphinx explains that he has challenged the human species before, who ended up remembering the game - if at first wrongly making the king the most powerful piece until correcting that the queen is the most powerful.

The Sphinx warns that a draw will be considered a loss for Pidge and plants a mushroom on her to absorb her mind into the fungus, leaving her woozy, but effectively making her opponent herself, albeit in the form of a mushroom. Each player has thirty ticks to make a move. She struggles to out-strategize herself. The Paladins encourage her, knowing she is the only one smart enough to beat herself, as she was smart enough to beat them. This inspires Pidge to utilize the whole team against her opponent.

Pidge assigns the rooks to be controlled by Lance because of his long-range specialty, awareness, and luck, instructing him to tell her ideas for maneuvers and warn her of enemy rook attacks. Hunk is assigned to bishops for his long-range specialty, but fearful way of attacking. Keith is in charge of the knights for his tendency to effectively strike while catching enemies unaware. Shiro, the designated leader, is assigned to all the pawns. Although they lose several pieces, Pidge's plan to use teamwork to beat herself succeeds in checkmate.

The Sphinx forces the Paladins out of his body so that he can morph into his true form and deliver the final test. The Test of the Spirit, the most difficult test of all is a riddle: "What can be totally broken apart and yet reform stronger than ever?" If the Paladins answer the riddle, the Sphinx will tell them where the pearl is.

Pidge answers Voltron, but much to the Paladins' surprise, the Sphinx deems her answer incorrect. The correct answer is hope, and the Sphinx refuses to tell them the location of the pearl. Pidge argues that Voltron is both applicable and relevant. The frustrated Paladins all agree that the riddle was vague enough for many answers to apply. Hunk suggests love as one of the answers. Keith suggests swords, as they can be broken and smelted to be even stronger. Lance suggests his own heart, as it has been broken many times. Keith points out that Lance's answer is the same as Hunk's. Lance, offended, tells Keith to be quiet, threatening to break him and see if he reforms stronger.

Shiro cuts into the two Paladins' argument to refocus them on the issue at hand, and suggests that Pidge's answer should be honored. The Sphinx stubbornly refuses and orders the Paladins to leave. Pidge declares that to truly test her spirit, the Sphinx need only stand between her and saving her friends and warns that the Sphinx will soon regret his choice. Once in their Lions, Pidge asks Shiro if she can give the order this once. He agrees. Pidge commands the Paladins to form Voltron and demands that the Sphinx tell them the location of the pearl.

The Sphinx, confident he will win, battles Voltron. Pidge orders Keith to help stabilize as Voltron attempts a leg-swipe to knock the Sphinx over, much to Lance's glee. The attack is fruitless as the Sphinx has wings to fly in the air, leaving Lance disappointed. Voltron launches itself into the air and pins the Sphinx to the ground, and Pidge again demands that the Sphinx reveal the pearl's location. The Sphinx finally concedes and admits that the riddle was intentionally made to be open-ended so he can decide his own answer and force everyone else to fail, all just to make himself feel superior. The Sphinx calls himself pathetic and Lance agrees, but the Sphinx also says he saw into Lance's mind, so Lance has no room to talk. The Blue Paladin drops the subject.

The Sphinx tells the Paladins that the Yalexian pearl can be found on the "evershadow" of Krell's moon, but warns that it is a dangerous place where "darkness lurks below". Pidge dismisses the warning, stating that the Paladins of Voltron can handle a little darkness. 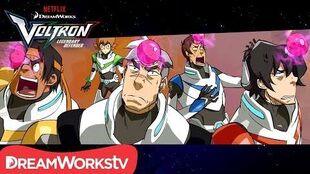 Vol1Iss4MotionComicPart1
The Riddle of the Sphinx Part 1 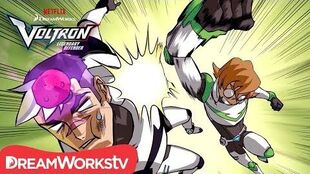 Vol1Iss4MotionComicPart2
The Riddle of the Sphinx Part 2

Retrieved from "https://voltron.fandom.com/wiki/Volume_1_Issue_4?oldid=41427"
Community content is available under CC-BY-SA unless otherwise noted.