Ian Brill
Andworld Design
Issue #3 is the third published chapter in Volume 1 of the Comics, and focuses on Lance. The storyline of Volume 1 occurs after the episode Rebirth and ends prior to the episode Crystal Venom.

A beautiful princess in the clutches of a vicious space dragon? Seems like a job for Lance! Voltron's (over)confident Blue Lion pilot swings into action but pretty soon learns that this monster is not at all what it seems.

After defeating the Abomination by satisfying its hunger, the Paladins must rescue Princess Malocoti, who is said to know the location of a Yalexian Pearl but has been taken captive. Lance is thrilled at the prospect of rescuing a princess. The Paladins decide to contact Princess Allura first to explain their extended absence and the situation with Coran. On the Castle of Lions, Allura is wildly speeding through the Castleship on a hover chair with the Altean Mice to entertain herself instead of resting; she is startled to be caught goofing off when the Paladins suddenly appear on-screen in the Bridge.

The Paladins tell Allura that Coran is currently under the custody of Kythylian Mu and that they must obtain a Yalexian pearl in order to pay off his debt. Allura is adamant to join the Paladins in saving Coran, but Lance interjects that he has already saved one "beautiful" princess, so saving another should be no problem. This blatant lie offends Allura; he misinterprets her rage-reddened face as embarrassment and her anger leads her to begin coughing. Shiro implores her to rest and recover. When she protests that she is fine enough to battle, Lance offends her yet again by dismissing her and insisting she dream about his return, making Allura shake her fist at him and rant. Keith silences Lance before the Blue Paladin enrages Allura any further. Lance, in his delusion, only believes Keith is jealous he is not the target of the princess' "affections".

Allura remains in the Castleship to recover from expending her energy healing the Balmera. Meanwhile, the Paladins fly their Lions to a tower on Krell where Princess Malocoti is held captive. They spot a woman standing at the top of the tower, but no signs of who or what is holding her captive. A red dragon larger than the tower suddenly appears. The Paladins form Voltron to battle the dragon, but the dragon can match their shoulder cannon with a fiery blast and is too nimble to be struck by the robot's saber. When they prepare to be struck, the dragon does not attack, and only seems to be yelling at them. Lance recognizes the behavior as the same kind Princess Allura displayed to him earlier, and concludes the dragon must be Princess Malocoti herself.

Just as they question who the woman in the tower is, the dragon Malocoti warns them of an imminent attack by the Krell Sorceress. Malocoti is too late; the sorceress' magical blast forces Voltron back into five Lions. She leaps from the tower before they can strike her and proceeds to take out the Red Lion, Yellow Lion, and the Black Lion with her magic. Lance finds the Green Lion gone without a trace, so dodges the sorceress' magical attacks in a panic as the only Lion left in the air, and only avoids being hit by luck. An invisible force suddenly pins the sorceress to the ground. It is none other than the cloaked Green Lion, as Pidge used Lance as a distraction to sneak up on their enemy.

With the Krell Sorceress defeated, Malocoti is freed from the spell and she reveals her true form to the Paladins as a beautiful princess. She thanks the Paladins for saving her and explains that while under the spell, she could not attack the sorceress but could not reveal who she truly was. She is glad Lance could see past the spell, and he admits he has been yelled at a princess before.

Shiro asks Malocoti for help and she vows she will assist with anything, but once told of their goal to obtain a Yalexian pearl, the princess becomes frantic and begs them not to undertake such a dangerous mission. She quickly relents when the Paladins explain they need it to save their friend. Malocoti explains the Paladins will need to depend on the bravest and cleverest among them to find the pearl, who she declares is Pidge for defeating the sorceress single-handedly. The princess instructs the Paladins to seek out the Sphinx to attempt its trials and find the Yalex. 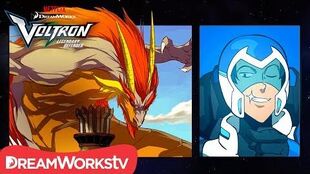 Vol1Iss3MotionComicPart1
The Tale of Lance and the Dragon Part 1 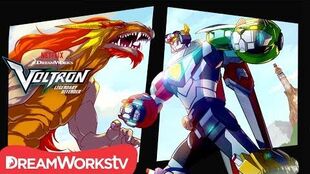 Vol1Iss3MotionComicPart2
The Tale of Lance and the Dragon Part 2

Retrieved from "https://voltron.fandom.com/wiki/Volume_1_Issue_3?oldid=48496"
Community content is available under CC-BY-SA unless otherwise noted.