Issue #2 is the second published chapter in Volume 1 of the Comics, and focuses on Hunk. The storyline of Volume 1 occurs after the episode Rebirth and ends prior to the episode Crystal Venom.

As Team Voltron searches for a treasure that can settle Coran's debt and save his life, the beasts they have to fight keep getting bigger and nastier! When a mountain monster has [[Voltron (Legendary Defender)]|]] on the ropes, Hunk realizes they'll need more than brute strength to stop it.

After unknowingly defeating the Guardian of the Krell, the Paladins are not well received by the planet's enraged inhabitants when they land their Lions to greet them. According to Elderbug Blate, the guardian has protected his village from another creature they call the Abomination. Pidge tries to ask the elder if he knows the whereabouts of the Yalexian pearl, but Elderbug Blate refuses to answer and continues to act hostile.

Elderbug Blate is furious seeing Hunk (Legendary Defender and his daughter consuming the sacred meal, but he quickly dedicates the feast to the Paladins when his daughter prompts him to try the new and improved recipe. The feast is cut short due to the arrival of the Abomination. In order to fight the massive beast, the Paladins form Voltron and engage the monster to no success. No matter what Voltron does, the creature just keeps regenerating and tangling Voltron in its tentacles. This is not aided by Lance and Keith's arguing. During the battle, Lance tries inserting the Blue Bayard into the Blue Lion's console unprompted by his Lion, but nothing happens, as Lance is not ready for that ability and only wants to prove himself better than Keith.

Hunk is famished with hunger, desperately thinking of the mound of food he wants to eat, and notices that the Abomination is attracted to the village because of the scent of the food as well. Hunk realizes that the creature also likes food as much as he does. Although the other Paladins are reluctant, Hunk takes command and formulates a plan to create a stew for the creature. Pidge is in charge of getting leaves from shrubs with the Green Lion, Lance collects water with the Blue Lion, Keith boils water using the Red Lion, and Shiro distracts the Abomination with the Black Lion. Hunk then brings the corpse of the Guardian of the Krell as the final ingredient for the stew.

After the stew is complete, the Abomination gorges itself on the stew and contently falls asleep. The team congratulates Hunk for such a brilliant plan, Shiro stating that he would never doubt Hunk's "gut" feeling, and the celebration at Krell continues. While they eat, Pidge once again asks about the Yalexian pearl. Elderbug Blate admits that he does not know where the pearl is, but he does know somebody else with that knowledge: the captive Princess Malocoti. Lance decides saving a princess most certainly sounds like a job for him. 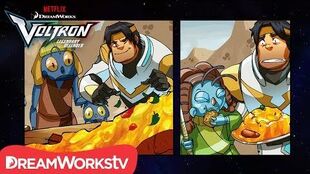 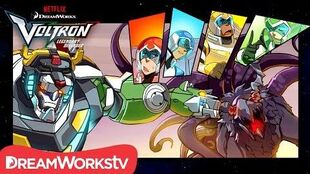