Issue #1 is the first published chapter in Volume 1 of the Comics. It has five known cover variants, and begins its story after the episode Rebirth.

When Team Voltron takes on a dangerous training mission in deep space, Coran, Princess Allura's majordomo, is captured by an ancient enemy. It will take teamwork, smarts, and, of course, Voltron, to save their friend's life.

After saving the Balmera, Allura is exhausted and must rest. Coran decides to take the Paladins for additional training to the Karthulian System, the training grounds of the original Paladins, while the princess is recovering. They plan to only be gone a day. The first stop is the Fripping Bulgogian, a restaurant Coran describes as "the best nullvillary in the fourteen tangents"; he considers the location not dangerous because it was a favored Paladin hangout - despite its current uneasy atmosphere.

Unfortunately for the team, some aliens are already seated at the table reserved for the original Paladins and inscribed with their names, as well as that of King Alfor. The aliens are not inclined to move, and neither is Coran fazed by their hostile nature. The arrival of his old friend and current "Mu" of the quadrant, Kythylian Mu, is enough to scare the other aliens away. The pleasant reunion is short-lived as Kythylian Mu mentions that Coran owes a large sum of money for a bet 10,000 years ago, and the job of a Mu is to ensure debts are paid. Coran does have the money on him, but there are two problems with it according to Kythylian Mu: the first problem is that Coran's money is in the form of Altean crown bills, Groggeries, which became obsolete when the Galra Empire established the GAC ("Galra Authorized Currency") as the universe's official currency. The second problem is interest. Due to Coran's ten millennia absence, his debt has increased substantially to the point that selling the Voltron Lions for double their worth to Zarkon would not be enough to cover his debt.

When the Paladins arrive in their Lions, they notice a settlement where they might gain some information on the Yalex, but before they can land, a massive mantis-like creature appears from the ground underneath and catches the Yellow Lion in its mouth. The creature's outer shell is too strong for the the Lions' tail and mouth cannons, so Shiro must free the Yellow Lion using the Black Lion's jaw blade. Fearing how the Yellow Lion's armor barely withstood the creature's jaws, the team forms Voltron to battle it. Voltron's saber is unable to cause any damage, but the team does not want to leave to continue their search because they believe the settlement nearby will be attacked instead. When Lance mentions they need a weapon as powerful as the creature's blades, Keith devises a plan to win: catching the creature's blades with Voltron's saber and turning its blades against its own torso. The plan is successful.

The villagers from the nearby settlement who arrive at the scene of the violent battle are dismayed at the sight of the fallen creature. Unfortunately, the deceased creature turns out to be the Guardian of thr Krell that protected the village, not the dangerous Yalex. 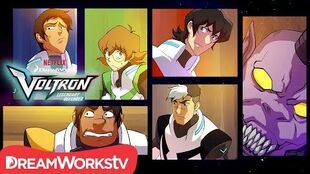 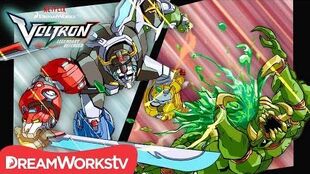 Retrieved from "https://voltron.fandom.com/wiki/Volume_1_Issue_1?oldid=41422"
Community content is available under CC-BY-SA unless otherwise noted.