Dreamworks Voltron VR Chronicles is an episodic virtual reality game by Digital Domain Interactive for various virtual reality platforms. It is an original, self-contained cinematic storyline separate from the storyline of the show and intends several planned episodes. The first episode features the player as Lance.[1] The game is available on the HTC Vive, Oculus Rift, and PlayStation VR. It is the second game to be set in the Voltron: Legendary Defender continuity after "Puzzle & Dragons." 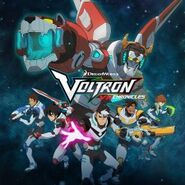 Battling in the Blue Lion.

The Bridge of the Castle of Lions.

Zarkon and Haggar.
Add a photo to this gallery

Retrieved from "https://voltron.fandom.com/wiki/Voltron_VR_Chronicles?oldid=46317"
Community content is available under CC-BY-SA unless otherwise noted.