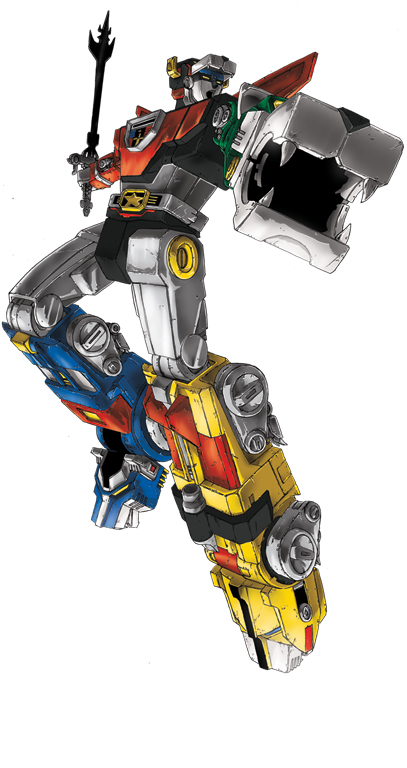 The Voltron Lion Force (aka Voltron III and Voltron of the Far Universe) is the incarnation of Voltron composed of five mighty robot lions. Piloted by a team of intrepid space explorers and a princess, the Voltron Lion Force defends the planet of Arus against the hungry ambitions of King Zarkon's kingdom on Planet Doom.

This incarnation of Voltron was adapted from the Japanese Beast King Golion television show. Due to its success, the story and team has evolved beyond this origin into more original directions.

As Voltron was always marketed as a single series, "Lion Force" is not a canonical name, but is widely-used in the fandom to distinguish this incarnation from the others. Another common nickname is "Lion Voltron".

The Lion Force premiered with the launch of the original Voltron: Defender of the Universe animated television show.

The Lion Force returned in the CGI-animated series Voltron: The Third Dimension, which was a sequel to the previous series.

There is a new reboot series called Voltron: Legendary Defender

Modern Comics did the first adapation in the 80s.

Devil's Due Publishing currently has the comic license.

Voltron, in the comic book series published by Devil's Due, was originally a unified machine intelligence, since it was created by sorcerers and scientists, therefore having hands and feet making him look like a knight. Voltron was tricked by Haggar into landing on a black comet with nearly the gravitational attraction of a singularity. This comet was either a reference to, or actually was, the Omega Comet from the anime, which had identical properties, and which appeared in the TV show. Voltron was then attacked by Haggar, and somehow blown into five pieces. They became the five "lions." (Much of this was presented in the "History of Voltron" back-up stories written by Mark Waid, which were ended early due to the cancellation of the series.)