The Yellow Lion is one of the components of Voltron, serving as the left leg of the giant robot, whose Paladin is Hunk. The Yellow Lion was the second of the 5 lions to be found, and reflected Hunk's personality of a large and armored attacker. The Yellow Lion is also a large lion, not as large as the Black Lion, but larger than the Red and Green Lions, and approximately the same size as the Blue Lion. The Yellow Lion generally takes down its targets by body - slamming or breaking off parts of the target. Hunk refers to the Yellow Lion as a boy.

In the second season, the Yellow Lion was shown manifesting a rocket booster pack and massive claws. Using them makes it a more dangerous melee fighter: the claws being able to tear through most materials with ease and the booster not only gives the Lion extra speed but making it a more effective battering ram. Outside of combat, the rocket pack and claws can be used to dig the Yellow Lion into position to brace against and hold heavy loads.

In the third season, the Yellow Lion can spiral through rock.

Hunk's Bayard can turn into a large multi or single targeting weapon that Voltron can use. The weapon is intensely powerful, and from what we can tell, the power in the weapon is not lost when it is split up. It is adept at taking down large fleets.

The... Yellow Lion is caring and kind. Its pilot is one who puts the needs of others above his own. His heart must be mighty. As the leg of Voltron, you will lift the team up and hold them together.

—Allura, in "The Rise of Voltron"

The Yellow Lion is the Lion originally piloted by Gyrgan that forms the left leg of Voltron. It is found on a planetoid being mined by the Galra Empire. The new Yellow Paladin who pilots the Lion is Hunk.

The Yellow Lion is the slowest of the Lions but makes up for this shortcoming with its heavily fortified armor. It is said to be the most blast-resistant Lion.[1] This defensive strength makes the Yellow Lion unfazed by most enemy fire and allows it to easily crush foes by ramming into them with its heavy body.[2] However, this does render the Lion highly at a disadvantage and vulnerable when submerged in water.[3]

Once Voltron is formed, the Lion allows a weapon to be summoned when combined with a Bayard.[9] The nature of the weapon depends on the Paladin wielding the Bayard, not the Bayard or Lion itself.[10] When multiple Bayards are combined with respective Lions, the summoned weapon is upgraded into a more powerful form.[11][12]

The Yellow Lion has an affinity with the element of land. It is able to unlock augmented Lion Armor, granting the Lion a pair of larger claws and a booster pack which increases the Lion's strength and speed, as well as its stability and balance on harrowing surfaces.[11] Hunk unlocks this ability through his desire to protect the Taujeerians.[11]

Like all Lions, the Yellow Lion possesses some measure of sapience. Through his mental connection to the Yellow Lion, Hunk is able to understand its suggestions on the next course of action during a battle. 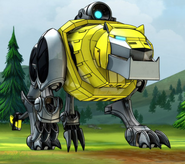 The Yellow Lion on Niloofar.

Icon in Super Mega Lion Attack.
Add a photo to this gallery