Guardian Spirit of the Sky

The Black Lion is one of the components of Voltron, serving as the torso and head of the giant robot, whose current Paladin is Keith. The Black Lion is the largest of the 5 Robot Lions, and can only be piloted by a person who is a natural leader, calm and collected in the face of danger.

The Black Lion has lasers that eject from its mouth. If aimed correctly, then the lasers have the ability to blow clean through a Galra ship.

Shiro, if he chooses to do so can create a jaw blade for the Black Lion. This makes close - range combat or the destruction of a full Galra commander ship easy, especially when the Black Lion is large and able to take hits.

The Black Lion would show Shiro a vision with one of its hidden abilities, its wings could expand to have several energy-bladed feathers that could destroy many ships in one pass or drastically increase the speed of travel, in Keith's case. Later, during a climatic fight against a suit of giant Robeast armor piloted by Zarkon, Shiro unlocked this weapon himself to save the others. It was also revealed that in this state the Black Lion can be enveloped in purple energy, giving the Lion a massive speed boost and seemingly the power to mystically phase through solid objects. This also allowed Shiro to take the black bayard from Zarkon who was in his armor through teleportation, and Keith to save his comrades.

While it is unknown if the bayard can grant a unique weapon by itself, when activated with the sword formed the sword was covered in a blazing aura that greatly increased the damage it dealt. When again used at the same time as the red bayard, Voltron's wings grow in size and gain booster rockets which allows the machine to fly at incredible speeds.

Finally, the wings of the Black Lion can be used as a shield when used with Voltron. This is used for defense against attacks from other ships. It was especially useful against the robot gladiator Myzax.

Ultimately, the most astonishing capability that the Black Lion possesses is not in any energy blasts, phasing powers, or superluminal space flight. Rather, Black's most mysterious and remarkable trait is its ability to preserve the consciousness of a dead or dying being within its own mind. This was done to Shiro following his death in the final strike during the Paladins' battle against Zarkon and his mech suit. Shiro's consciousness was later transferred into the body of a clone, achieved by Allura.

The Black Lion is the decisive head of Voltron. It will take a pilot who is a born leader and in control at all times, someone whose men will follow without hesitation.

—Allura, in "The Rise of Voltron"

The Black Lion is the Lion originally piloted by Zarkon that forms the core of Voltron as its head and torso. It is found hidden in the Castle of Lions on Arus along with Allura and Coran. The new Black Paladin who pilots the Lion is Shiro until Zarkon's initial defeat and Shiro's own mysterious disappearance, when the Lion chooses Keith as its next Paladin.

The Black Lion is the largest of the Lions and said to be the most skilled in combat, as well as the smartest, strongest, and most difficult Lion to fly, demanding the most energy from its Paladin.[1][2]

Once Voltron is formed, the Lion allows a weapon to be summoned when combined with a Bayard.[9] The nature of the weapon depends on the Paladin wielding the Bayard, not the Bayard or Lion itself.[10] When multiple Bayards are combined with respective Lions, the summoned weapon is upgraded into a more powerful form.[11][12]

The Black Lion has an affinity with the element of sky and the cosmos at large.[2] It is able to unlock a boost in power and speed that is unleashed when the Lion unfurls its wings into an expanded form called Ephemeral Blades or Bladed Wings, allowing it to vanquish enemies instantly and phase through physical objects.[13][12]

Like all Lions, the Black Lion possesses some measure of sapience. It has rushed to shield Shiro from damage with its body while no one was piloting it.[9]

Through his mental connection to the Black Lion, Shiro can see through the Lion's own eyes while piloting, and the Lion is capable of instructing Shiro on the next course of action during battle; more notably, it is capable of showing Shiro images of the past within his mind, including its form as a comet prior to becoming a spacecraft, as well as images of the present, such as Zarkon's husk of a home planet outside the Lion's displays.[13] The experiences seem real enough that Shiro mistakes he flies at high speeds, feels turbulence, and actually travels from the Castle of Lions to the planet, when in reality the Lion never leaves the Castleship.

This mental connection also allows its Paladin's essence to travel to mysterious realm where if the Paladin dies, their body in the physical realm will die as well, but while they feel all pain dealt to them, the sustained wounds do not appear on the Paladin's physical body.[13]This realm was described by Shiro as being the inner quintessence of the Black Lion, which he noted to be an almost infinite void. Communication through this realm with the outside world is limited, with notable exceptions. It appears to those within it as an expanse of outer space tinged with black and purple light. 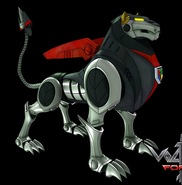 The Black Lion on Talwar Six.

Icon in Super Mega Lion Attack.
Add a photo to this gallery