Viceroy Throk is a Drule, and native of the Planet Drule.

Voltron: Defender of the Universe Continuity

Possibly the worst of the worst, Throk is very bitter towards Mozak and Hazar, and a loyalist supporter of Emperor Zeppo. Throk becomes a powerful enemy under Zeppo towards the Voltron Force, especially during the impending arrival of the Voltron Force on the planet Drule to aid Hazar in liberating the home world, and overthrowing Zeppo. However Throk and a few of his comrades managed to escape in a piloted mechanical Robeast. 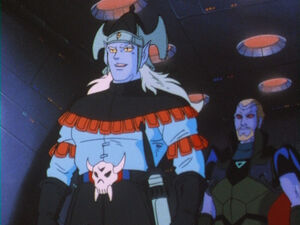 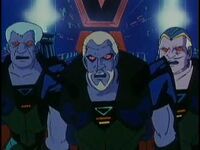 The destruction of the Drule planet and its Empire[1] did not put an end to Throk or his ambitions. A few months after the destruction of Drule, he would join forces with Zarkon and Lotor of Planet Doom in building the universe's most feared space armada, the Fleet of Doom, in an attempt to fill in the power vacuum left behind by the war. They were stopped by the two Voltron's.

Retrieved from "https://voltron.fandom.com/wiki/Throk_(DotU)?oldid=49249"
Community content is available under CC-BY-SA unless otherwise noted.