The Space Mice, or more simply the Mice, are a quartet of mice-like aliens hailing from planet Altea. Their

Platt is the largest member of the mouse family. He has yellow fur, with green fur on his ears, tail, and gut. He has a white patch over his right eye, and a sunny temperament.

Chulatt is the smallest mouse. He has pale blue fur, with medium blue fur on his ears and tail. His stomach is white, with a white oblong patch on his forehead. He seems perpetually timid and impish.

Plachu is the leanest mouse. He has sultry blue-green fur, with pink ears, and white fur on his stomach. He has the longest tail and a pointy jaw. He has red eyes and a hostile, cynical personality.

Chuchule is the final mouse. She has pale pink fur, with white fur on her stomach. She has almond-shaped red eyes, and a childlike, frivolous temperament.

Through a stroke of luck, the mice were able to escape destruction by entering Allura's cryo-pod and spending the next 10,000 years in suspended animation. This extended their lifespan, increased their intelligence, and formed a mental link between them and Allura. This enables her to communicate with them psychically; a connection they use to relay warnings and gossip. It was the mice who told Allura about Pidge disgusing herself as a boy, and about Lance's romantic feelings for her.

Their intelligence and diminutive size enables the mice to perform the fiddly mechanical tasks around the Castle of Lions which Hunk and Coran can't do. This skill was used to the best effect during the Paladins' Season 3 battle with Sendak, when the mice helped repair the Castle and later liberate it from Sendak and Haxus.

The mice have also shown proficiency at taking down combatants many times their size. They swarm an opponent as a team to disorientate them, and then bite exposed skin while using their speed and agility to evade capture. In Season 7, they help Coran eliminate guards and rescue the Paladins, Romelle, Shiro, and Krolia from Galra prison.

The Mice realign the crystal powering the Castle's particle barrier.

Coran tries to get the mice to make him a sandwhich. It doesn't work.

"Hunk tried to eat what?" 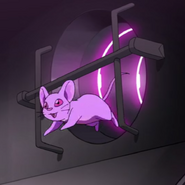 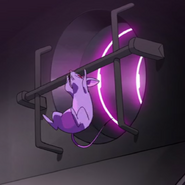 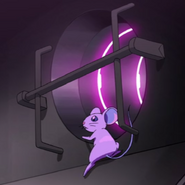 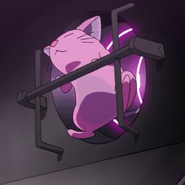 Wonder if s/he's related to the Black Beast of Aaaaarrrrrrggghhh?

Uh, which button do I push again?

"Are you seeing what I'm seeing?"

To be fair I'd be making that face too if giant snails were in my hair.

At least they’re not wearing dresses and doing the can-can this time.

Platt on the left, Chuchule on the right.

Distraught over the disappearance of Allura and the Paladins through a dimensional rift.

Add a photo to this gallery
Retrieved from "https://voltron.fandom.com/wiki/Space_Mice_(Legendary_Defender)?oldid=48963"
Community content is available under CC-BY-SA unless otherwise noted.