Emily Eiden
Shay is an alien resident of a Balmera X-95-Vox, a living planet, who works under the rule of the Galra Empire to extract power Crystals from her living home to fuel Galra warships. She is the sister of Rax. She and her family are freed from the Galra Empire after Hunk returns to the Balmera with Team Voltron to save them and restore their dying planet.

As a young Balmeran girl, Shay is a bipedal alien who stands taller than average human height;[1] she has gray skin and yellow eyes with light brown eyebrows. At her shoulders, arms, and legs, her skin his bumpy rather than smooth.

Shay's scalp is brown with two protrusions at either side of her head, reminiscent of ears, that are each pierced with a single silver-colored metal hoop. She has four small dark brown horns on the top of her head, and one at each side of her jawline. The brown covering her scalp appears to be a harder substance than her skin, as it becomes jagged and bumpy down the back of her neck.

As a Balmeran, Shay also has a short tail, and has four clawed fingers on each hand, as well as only two clawed toes on each foot.

Shay wears a short green dress accented with yellow at its shoulders, reaching down to her mid back in a single stripe, and lining each side of her torso down to her waist, where she wears a darker green belt. The dress is slightly worn at its hem, neckline, and arm holes, with pieces of cloth torn or missing.

Shay is a kind-hearted Balmeran who believes in hope and helping others. This is in sharp contrast to her brother, Rax, and her family, who believe in supporting themselves in any way possible to secure their existence. We see Shay's kind persona in her very first lines, where she argues with her more dominant brother about saving Hunk and Coran. She even takes it to the next level by helping them escape, which prompts Hunk to ensure her rescue out of debt and escape from the Galra.

Shay has a very morally sound and noble personality, willing to put herself at risk for the sake of others even if it means angering the Galra Empire.[1] She is highly inquisitive and curious about the world outside her planet; Shay can seem somewhat innocent as she has only known a world ruled by the Galra and lived below the surface of her own planet, but she is daring enough to sneak out at night to wonder at the sky above from as high as she can climb.[2] She is very empathetic to the suffering of others, especially that of her home.

Shay has no concept of what freedom is until she meets Hunk. The Yellow Paladin inspires in her a desire to free her people from their oppressors, showing Shay can clearly recognize what is unjust and wrong, making her a righteous person. Although she is inclined to follow whatever he brother Rax says, Shay is stubborn in her beliefs, constantly pleading for her over-protective brother to see the light of what must be done, and she is naturally rebellious, going so far to act against her brother if she knows it necessary.[2]

Like all Balmerans, Shay can communicate with her species and the Balmera itself by placing her hand upon any part of the planet, sending and receiving messages as vibrations.[2] This allows her to seek aid from the Balmera when needed or to send orders to several Balmerans at once. 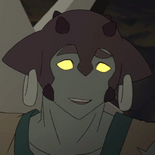 Shay with her folks.

From left: Hunk, Coran, Shay's grandmother, Shay, her mom, and her dad.

"Your brother's kind of an ass, Shay. Just sayin'."

Shay and her folks watch the Castle return.

Everyone got new threads. Sweet.