None (Pilot Karp is male.) 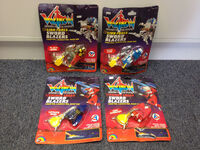 Fear the dread Prince Lotar and his ally, the "Red Robeast"!
Add a photo to this gallery

...but the red will make it go faster!

In Golion, it's stated to be going over 500kph on the ground.

And can bolt at Mach 15 while in the air.

Add a photo to this gallery
Retrieved from "https://voltron.fandom.com/wiki/Red_Raptor_Robeast?oldid=18437"
Community content is available under CC-BY-SA unless otherwise noted.