My Brother is a Robeast

General Mogor was a general in the Doom military. 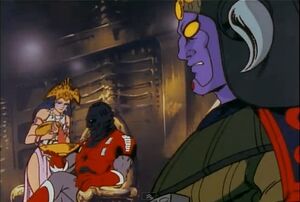 After the Galaxy Alliance landed ground forces on Doom and wrecked Castle Doom, they promised to spare any enemy that surrendered. The nobles begged Lotor, who had been installed as king of Doom by the Drule Empire, to surrender to the Alliance. After he refused, Mogor and some soldiers entered the throne room to remove Lotor from the throne. Though outnumbered, King Lotor responds by cutting down Mogor and everyone else in the room. Mogor was almost certainly killed or severely injured as he has not been since. [1]

Retrieved from "https://voltron.fandom.com/wiki/Mogor?oldid=30043"
Community content is available under CC-BY-SA unless otherwise noted.