Manset is a smuggler and friend of Keith's who was once a political prisoner of Sky Marshall Wade. [1]

Since he helped Keith, Manset has been a prisoner of the Galaxy Alliance. [2] 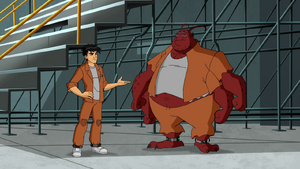 He was a member of the Den Resistance and was imprisoned in "The Void", a floating prison operated by Wade. He was broken out of prison by Keith and escaped, and is seen again helping with the relief effort by importing food and supplies for Planet Ebb.[3]

He also provided backup for the Voltron Force by supplying one of his airships filled with Krelshi, and the Lion Riders in the final battle with Wade. [4]

Manset once had a few "business problems" back home with former soldiers of Planet Doom, and gives Voltron Force the "friends and family" discount in order to get them to help him. It appears Manset has gone legit, as his smuggling days may be over, for the moment. [5]

Retrieved from "https://voltron.fandom.com/wiki/Manset?oldid=29099"
Community content is available under CC-BY-SA unless otherwise noted.