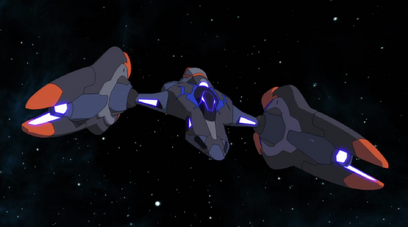 Lotor's fighter is a large, supremely maneuverable spaceship Lotor pilots when he chooses to go after opponents first hand.

The ship is made up of three sections – a central fuselage containing the pilot’s cockpit, and two variable-geometry wings mounted on pylons to either side. The wings are able to rotate a full 360° through the pitch axis, allowing for the drives mounted at the rear to redirect thrust in any direction, as well as allowing the front guns to keep a constant lock on target. Should the motion of the wing be restricted, however, the ship loses nearly all mobility.

It was likely destroyed when Lotor and his generals scuttled the cruiser they were using as a base of operations.

Add a photo to this gallery
Retrieved from "https://voltron.fandom.com/wiki/Lotor%27s_fighter?oldid=28427"
Community content is available under CC-BY-SA unless otherwise noted.