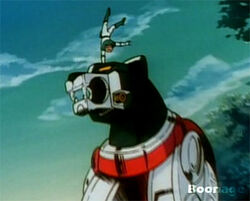 The Green Lion is piloted by Pidge and is the left arm of Voltron.

The Green Lion is the left arm of Voltron and the fifth massive lion present. It is mostly covered in green save for its limbs and mouth. It has yellow eyes and pointed ears as well as a chain collar around its neck. The sides of its mouth have a hollow spherical shape, making it appear even more ferocious than the Red Lion. It also has wheel-like bolts in its shoulder and limb joints in order to allow fluid execution of movement. It sports an obscured white band on its belly and a rectangular design on its back. It also has three claws and a white-colored tail.

The Green Lion resides within a massive tree far from The Castle of Lions and is therefore Arus' secondary line of defense against an attack. In order to be activated (though not shown), a transport car takes its pilot through a tunnel arriving underneath its chest. The car opens and lifts the pilot's seat from the car into its chest and cockpit. Once its activation key is placed, its eyes glow and it comes to life with a roar.

The Green Lion forms the left arm of Voltron. During formation, it loses its limbs and tail. The Green Lion affixes to the Black Lion's left shoulder, the Red Lion affixes to its right shoulder, and the Blue and Yellow Lions affix to its right and left legs. The Black Lion's mouth opens up to reveal a humanoid face and its ears open up to form horns and the formation of Voltron is complete.

The Green Lion has a number of abilities displayed in the show.

Retrieved from "https://voltron.fandom.com/wiki/Green_Lion_(DotU)?oldid=49351"
Community content is available under CC-BY-SA unless otherwise noted.