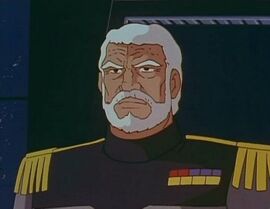 Space Marshall Graham is the supreme commander of the Galaxy Alliance.

Graham is usually conducting meetings about the war with the Drule Empire with Commander Steele. He has helped the Lion Voltron and Vehicle Voltron several times.

Graham was once captured along with Coran and several representatives of the Alliance during an attack on Earth, led by Prince Lotor. Graham and the others were eventually saved thanks the efforts of the Lion Voltron Force.

Retrieved from "https://voltron.fandom.com/wiki/Graham?oldid=48725"
Community content is available under CC-BY-SA unless otherwise noted.