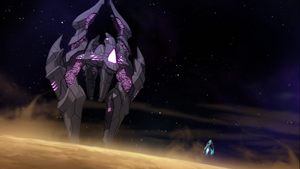 Similar to the Universal Station, Zarkon's Central Command System consists of both artificial and naturally occurring structures. Located at the heart of the Galra Empire, it serves as Zarkon's headquarters, a shipping destination for refined Quintessence, and is home to the majority of the Empire’s fleets.

So far, the system seems to contain:

Retrieved from "https://voltron.fandom.com/wiki/Central_Command_System?oldid=31988"
Community content is available under CC-BY-SA unless otherwise noted.