For other uses, see Castle of Lions.

The Castle of Lions, also known as the Castle-ship, is an Altean battleship and the home of Princess Allura and the Paladins. Built 10,600 years ago by Coran's grandfather, it set down on Planet Arus and became a permanent fixture there. After the assembly of the new Paladins, the castle-ship left the planet to take the fight to the Galra Empire. It was destroyed during the battle with Lotor and his Sincline Mech. But it was rebuild by Coran and the new Alteans, a few years later.

The castle featured multiple amenities for its crew, including a training deck equipped with sparring bots and an invisible maze for Paladin training, a fully stocked kitchen and galley, sleeping quarters for at least seven people, a medical wing, a ballroom, a holodeck interface for accessing with and learning from stored memories of deceased beings, a shuttle bay with at least six vehicles, a prison hold for enemies that couldn't be finished off, and a swimming pool.

The quarters for typical crew members were quite basic; they include bedding, storage for personal belongings, and access to a personal computer and holographic display. Allura's quarters are roughly three times the typical size, being far more spacious.

The castle also included five hangars - one for each lion - and five high speed access ways to get their Paladins to them at a moment's notice from the bridge. The Red, Green, Blue, and Yellow Lions each reside in one of the four engine-towers at the periphery of the castle, accessible from chutes at the four corners, while the Black Lion resides in the central portion, accessible by an elevator located on the bridge.

The castle also had a massive weapons system, capable of decimating a sizable fleet of enemy ships with minimal loss of power. It also features an artificial gravity system, allowing the crew to maintain their biological functions at normal levels without the degradation that comes in micro-gravity. The ship's most impressive defensive feature is the particle barrier, a massive force field that can be deployed either omnidirectionally or be concentrated into a single spot. The same barrier can also project energy blasts or concentrated energy beam with destructive firepower as offensive attack. Suffice it to say, the particle barrier is one impressive display of Altean defensive technology.

The medical wing was one of the most densely fortified locations in the castle, and is equipped with several amenities that make the most of the Alteans' advanced technology. The medical wing includes eight cryo-replenishers, which can be used to keep a subject in indefinite suspended animation, ceasing all functions except for a minute degree of brain activity. How these capsules work is unknown, but they are able to retard the aging process entirely, as well as allowing the body to be healed while preventing any chance of injuries sustained in battle from worsening by halting all functions except for cellular regeneration. The full extent of these medical marvels is unknown beyond being able keep a subject in suspended animation for 10,000 years. However, they are limited, as evidenced by being unable to heal Shiro's facial scar or regenerate his original arm following its amputation and replacement by Galra tech prosthesis. 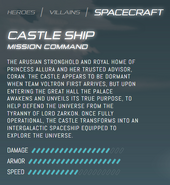 Without power after the crystal's destruction.

Corrupted after the install of the Galra crystal.

Coming in for a landing...

Shields diverted to bow during a space battle.

In orbit above the Balmera.

Coming in for a landing.

Just when you think the Castle is huge...

Flying through the wormhole after Haggar's magic corrupts it.

Roses are red, and violets are blue, One day we'll cruise down Blood Gulch Avenue, It's red vs red, and blue vs blue, It's I against I and me against you...

Flying through debris on approach to Taujeer.

See those wee little specks? Those be Allura and the Balmerans.

Flying through a wormhole in pursuit of Zarkon's disabled command ship.

When all power is diverted to attack.

Dead in the space after Zarkon’s return attack.

Lotor's cruiser, as compared to the Castle.

The Castle back when it was stationed on Altea.

Docking inside the Central Command System.

The White Hole at the center of the Patrulian zone.

Detail on the personal transport crafts.

The Castle of Lions...reduced to a diamond.

They must have hosted some big guests at some point to warrant a front door this big.

Universal starmap projection on the Bridge.

Sunken couches are so 70's.

Castle generator room. Whatever you do, do NOT cross the streams.

All this technology and STILL no sign of a seatbelt.

Door to the training deck.

Infirmary viewed from above.

Some sort of observation deck?

Can we just call these Jefferies tubes? I bet Coran totally had an uncle Geoffery.

Klanmüirl means what exactly? Bear? Danger? The Alteans are freaking with the humans again?

Note Pidge going into her elevator off to the right.

To borrow a term from another trek through the stars - Astrometrics lab? Stellar cartography?

Bridge as viewed from main entry.

Bridge as viewed from

Power core crystal on the Bridge.

Another view of the lounge but viewing towards the vidscreen.

So the castle has a supermax ward? That’s not alarming at all.

Practice drones in the training deck.

I hope those walls are soundproofed.

Pidge’s room is a disaster waiting to –
- nevermind.

Sleep is for those too weak to game on.

Coran’s room shows the most personality yet.