A Ghost and Four Keys

The Battle Batbeast is the first Robeast battled by Voltron. It first appeared in the third episode "A Ghost and Four Keys" and was destroyed in the fourth episode "The Missing Key".

The Battle Batbeast is the first robeast that the Voltron Lion Force encounters and battles, with Keith temporarily piloting the Green Lion before passing it to Pidge. 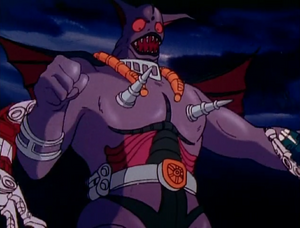 The Battle Batbeast is a huge, purple-skinned humanoid with large, wing-like ears, red eyes, and a wide, black-lipped, fishlike mouth full of long pointed teeth. It has clawed humanoid hands, while its feet have five long claws instead of toes and a large spike pointing back from the heel. Two short, rayed fins spread from the top of its shoulders like wings, and rayed fins run along the back of the calves. Two pointed drill-like spikes protrude from its chest.

In addition to the clawed hands, clawed feet, teeth, and spiky drill nipples, the Battle Batbeast posesses a slew of weapons. It has a sword with a red handle and a blue stripe in the middle, rocket holsters on both of its hips, and pulse blasters strapped to its wrists.

Commander Yurak's troops are destroyed and retreating when Haggar's robeast arrives to confront the Voltron Force. As they only have four lions, Keith, Lance, Hunk, and Sven can't form Voltron, so they are easily pushed aside and knocked unconscious.

The next day, having successfully obtained the fifth lion key, they try again for round two. Once again, the individual lions do little more than bounce off the robeast as it stands still.

Eventually, Keith makes the call to form Voltron, so they power through the Robeast's attacks and combine. The robeast doubles its attack with its sword, but it is no match for Voltron's blazing sword. At one point Voltron is entirely on fire from the pulse blasters, but a few seconds later he's okay again.

Add a photo to this gallery

Retrieved from "https://voltron.fandom.com/wiki/Battle_Batbeast?oldid=29984"
Community content is available under CC-BY-SA unless otherwise noted.