BLIP tech is an acronym for ‘Biothermal Life Indicator Point Technology’. It consists primarily of small egg-shaped sensor pods that can be deployed to survey a planet, generating maps of terrain as well as detecting the presence of life forms and enemy combatants.

When BLIP drones are scattered on a planet, the technology is able to be applied to maps of the planet generated by the sensors in the Castle of Lions. This allows the Voltron team to track movements of the planet's inhabitants, as well as any robotic creatures such as Sentries of the Galra Empire.

The Paladin's suits also contain sensors with much the same function, allowing the Castle to monitor their health and position within a battlefield.[1]

Lance and Keith shown on the map. 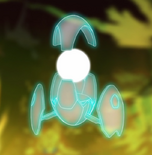 Add a photo to this gallery

Retrieved from "https://voltron.fandom.com/wiki/BLIP_tech?oldid=47037"
Community content is available under CC-BY-SA unless otherwise noted.