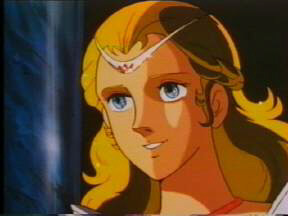 Allura is princess of Arus, and the last member of the planet's royal family. She becomes pilot of the Blue Lion after Sven is no longer able to do so. She has highly intelligent pet mice that can understand human speech. She is also the love interest/lust object of Lotor.

In the original Japanese version, her name is Princess Fala (ファーラ姫, Fāra Hime?).

Voltron: Defender of the Universe continuity

Princess Allura spent at least part of her childhood in the Castle of Lions. Her parents were often away on royal matters. During her childhood, she met the Space Mice. [1] Sometime before the events of the series, her father was killed. At the time Keith and company arrived on Planet Arus, she and Coran were the only people in the castle. [2]

After the castle got a new keep [3], survivors of the bombing of Arus went to the castle to volunteer to fight the forces of Planet Doom. After Sven was injured in an attack by Haggar [4], Allura started flying the Blue Lion. [5]

She spent at least a few months balancing training to fly Blue Lion and executing her duties as princess. One day, she first met Prince Lotor [6], who developed quite a crush on her. She would be the objective of some of his attacks on Arus.

She also visited Planet Pollux, and started friendly relations with the royal family there. [7]

Retrieved from "https://voltron.fandom.com/wiki/Allura_(DotU)?oldid=8203"
Community content is available under CC-BY-SA unless otherwise noted.