Akira Kogane (黄金旭, Kogane Akira?) aka "Chief" (チーフ, Chīfu?) is the calm but commanding captain of the GoLion team and pilots the Black Lion. He has a thick dark mullet-like mane of black hair and dark eyes, and often wears a red flight suit with embroidered patches and gogo-like boots. 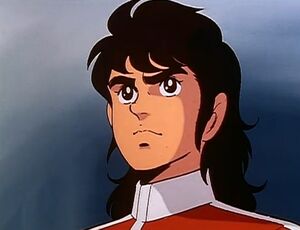 Akira Kogane, nicknamed "Chief" by his comrades was the captain and commanding officer of the five Earth space pilots that eventually became the pilots of the legendary giant robot Golion and the heroes of Altea. He has a calm yet commanding personality and while he is patient and respectful, he does not like to have his orders questioned by his subordinates.

In 1999, he and the others returned to Earth after a deep space voyage, only to find Tokyo in ruins after a great nuclear war. Captured as slaves by the Galra Empire when their ship was abducted, the pilots were forced to fight in an off-screen battle between a Deathblack Beastman. According to Hiroshi, although "The Deathblack Beastman's attacks were Insane" they survived, though Tsuyoshi and Akira gained multiple scars in the process and their arms were branded afterwards.

Eventually, Shirogane suggests that they break out of captivity and stealing a ship after a conversation that resulted from Hiroshi's observation that the vultures were bringing back bones left over from the Beastman's meal of Slave Stew. Akira formulates a plan of escape, and the space pilots succeed, and escape to the planet Altea in a commandeered slave ship. Escape from Slave Castle.

He and the others became the pilots of GoLion, with him piloting Black Lion and taking position as leader.

One of the saddest events he experienced was an unauthorized mission to check back on Earth,. Barely escaping a trap set by Galran forces, Akira witnesses Earth exploding. Goodbye, Earth

He participated in the final battle against Galra, and his final appearance in the series is of him relaxing in a meadow along with the other earthlings and Princess Fala.

To spite the fact that Akira had lived as a slave of the Galra Empire for an undisclosed time, he seems unaffected by his time spent in servitude and (aside from a brand on his forearm) bears no scars from the ordeal, either physical or emotional. This might have been an attempt by the writers to show just how strong a leader and warrior he is, but is far more likely just a severe lack of character development.

Like the other male GoLion pilots, he is attracted to Fala, however unlike in the American version of the show, there is no romance between him and Princess Fala. Instead, Akira views her occasionally as a younger sister and at other times as just another member of his team. This also makes the rivalry between him and Sincline seem absurd seeing as how neither has any more reason to hate the other than the rest of the members of their respective factions. Whether the writers intended to develop a relationship between Akira and Fala but for whatever reason didn't remains unknown.

In the manga counterpart, Akira and his team landed on Altea to find the remaining royal family, Princess Fala and Raible, who assign them as the pilots of GoLion.

Akira and his team pilot GoLion in the Japan-exclusive crossover game Super Robot Wars W. Like in the anime, the GoLion team were Galra captives that escaped to Planet Altea and found GoLion. After witnessing the destruction done to Altea, the team convince Fala and Raible to come with them to Earth to warn them about the Galra Empire's destruction.

They are introduced in Chapter 7 where they meet Nadesico on Mars and help them fight against the Jovians and later the Galra that followed them. After the battle, the GoLion team informs them about what happened and return to Earth only to be attacked again where Honerva promises to spare Earth if GoLion was handed over.

While protecting the GGG Headquarters on Earth, Takashi was seriously injured by Honerva but continued to help protect the headquarters until his death. Fala volunteered to pilot the Blue Lion to which Akira pushes hard to help her learn to pilot it.

In the game, it is revealed that Gai Shishioh of GaoGaiGar was a friend and former classmate of the GoLion team and was even offered by Akira to join the team to which he declines saying that he wasn't suited for it.

Retrieved from "https://voltron.fandom.com/wiki/Akira_Kogane?oldid=49016"
Community content is available under CC-BY-SA unless otherwise noted.