I get what you mean, but all I can say is start a conversation then. I literally have an essay on why ships are important in a fandom, no one has said you can’t talk about anything other than ships, people just don’t start the conversations. Stating that you want other conversations doesn’t mean that they will just materialise. My best advice is to pick a topic, ask a question and wait for people to reply. If they don’t, you know they are not interested in your conversation and to pick a new subject.

I mean I don’t mind, it’s not the first person I would ship either of them with, but I have not problems with the ship.

A reply to Shentamil Selvi
0

(Idk if I spelled olkarion right, it’s been a while since I have seen the name let alone need to spell it)

A reply to Shentamil Selvi
0

Could quite possibly be. Tho it might not be how we think of an invasion typically. For example instead of little green creatures, wrinkled creatures with growing fingers or even anything from the galra to the olkarion people. It could be something else. Possibly a new virus that shares a body with us, subtly changes our attitudes to suit them. Maybe it’s time travellers come to warn us about setting up a more sustainable future. Maybe it’s humans light years away that settled on a new planet but were desperate to see the planet that humans came from, and wanted to preserve it. Maybe it’s not even and invasion, they just want to visit.

But it whatever happens, I don’t think I it’s all that likely unless it is hostile. I mean who would want to make friends with humans as we are currently. Look at us. Some of us can’t even get over differences in our community. Imagine a whole new species trying to fit in when other humans can’t. So if we do get invaded, it would most likely be a galra like situation unless we change.

A reply to The Proto Commander
1

This isn’t the first time either, the last “fight” got deleted as far as I know.

A reply to The Proto Commander
2

Ok ok ok. Cobra, whatever you wanna be called, (I also don’t care) rather than attack people for possible interests or a whole part of the fandom, threatening for them to be SHOT BY NAZIS IN A WAR - why not just grow up and start a conversation about a part of the fandom you do like. You never know, you might finally be able to have a civil conversation for once.

A reply to The Proto Commander
0

I’ve commented most of this already, but I’m gonna make sure it sinks in this time.

Ships are what got got me into most fandoms. I would see fan art while scrolling on Instagram, I would read a fanfic on wattpad without realising because I was bored, and then I would be curious. I would watch/ read the cannon. And then the community has a new member.

I don’t mind who you ship, allurance IS cannon, but remember the ending? For those that don’t, Allura DIED. She and Lance can’t date as of right now. So I don’t see why people can’t ship others. Some people just like the rivals to lovers trope, and klance fits it.

So maybe we should all just agree to disagree. What I mean, is we keep negatives to ourselves. You want so bad for people to talk about other things than ships, but have you for one second thought that you couldn’t find a conversation because people weren’t interested? Why not start a conversation?

It takes less time to ignore a shipping post than it does to attack people over it.

This is platform is for the FANS. The shippers, the fanfic authors, the fan artists AND the people who prefer the classics.

But know this, you can only get so far without altering the originals, I mean imagine pizza. If it was all cheese, plain cheese. It gets boring doesn’t it? People lose interest. But now add some pepperoni, it’s new, it’s got more variety and it’s got fans. So you add new combinations - yes eventually you get combinations that most people disagree with - but it still has few fans, or it would have slowly disappeared.

This can happen with ships as well, and as displayed in a poll I may later do, some ships do better than others, but would still get a small following.

My point is, unless you want this fandom to die out, just as the “80’s” one almost has, you need to let people add their own spin on things.

A reply to The Proto Commander
0 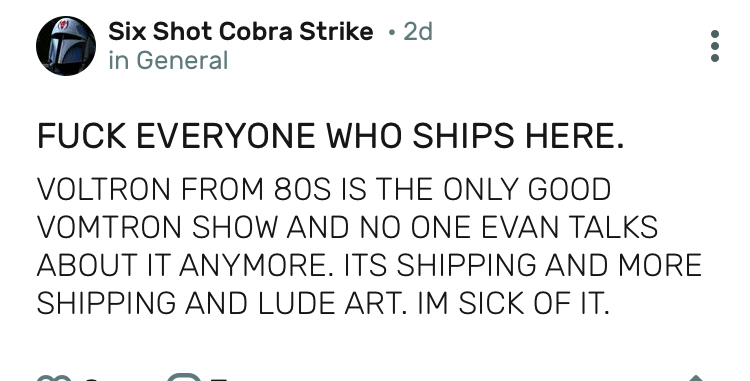 And vomtron? Can’t even spell the name?

I’ve said it before and I will say it again. I found most of the fandoms I’m in through ships. So don’t you DARE diss people that ship. They are practically the ones that keep the community active.

Why not just start a poll like “what is the best 80’s voltron character” or actually start a meaningful discussion about an aspect of it. You will have less ticked off people like me adding to your negativity on a site for the fans. All the fans. The ones with obscure ships, fanfic authors and fan artists. The ones that actually let their imagination free and give more the the fandom.

A reply to The Proto Commander
1

First of all, lewd*

And if you want to talk about it so badly, WHY DONT YOU START A CONVERSATION INSTEAD OF ATTACKING THE PEOPLE THAT ACTUALLY DO SO.

I ignored the other post similar to this because it wasn’t outright attacking anyone on here, just pointing out frustrations as I am. But seriously my dude?

A reply to Your friend jay
1 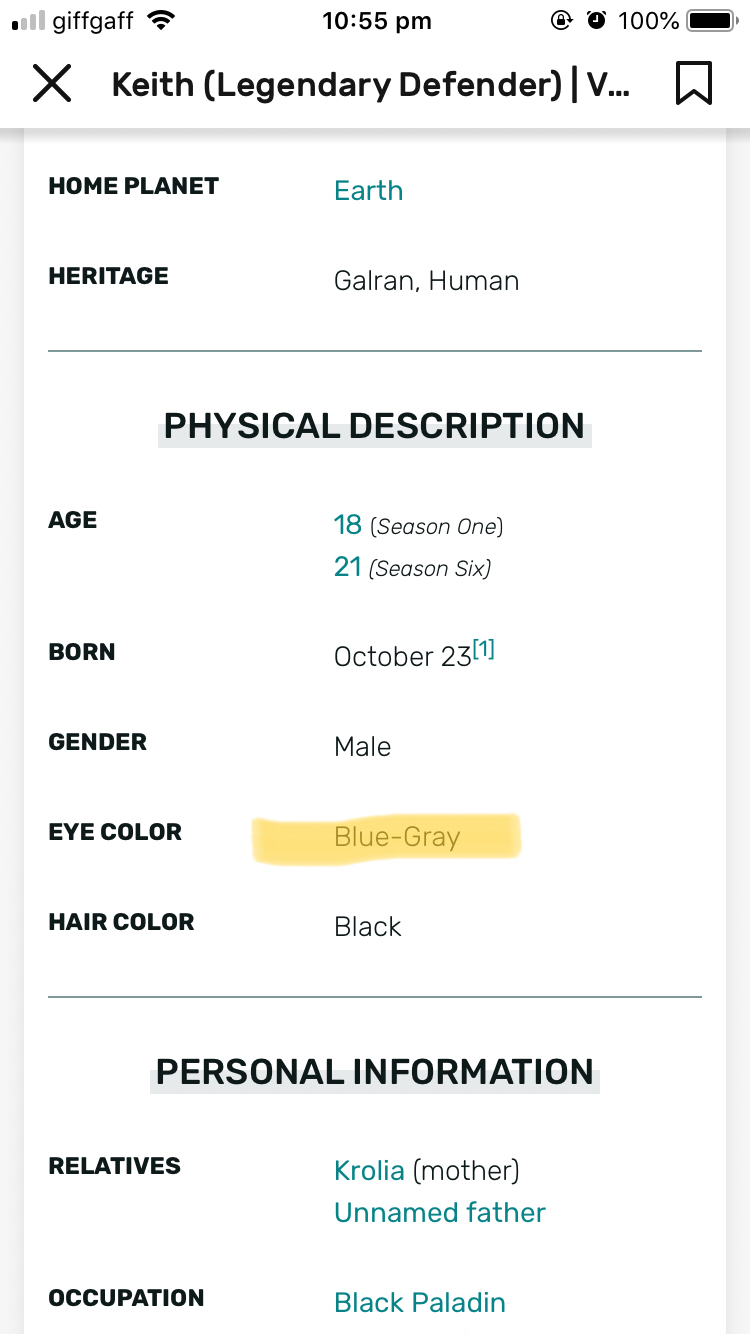